Mysterious city is a dream location in the Valley of Watery Mists. 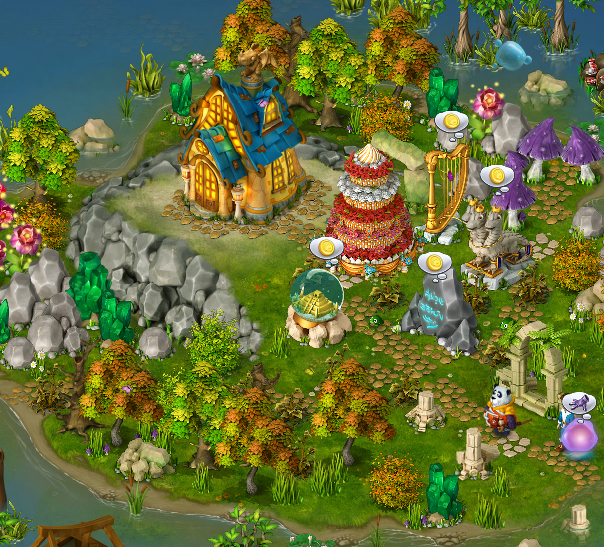 When you arrive at the Mysterious City you will notice a ruined temple , crude nephrite , more valuable frogs, and bubbles floating around the sky. What you may not notice is a few treasure troves off shore which will tell you to Finish the construction to receive income from them. Be sure to complete this temple as it can be used for actually creating Experience points! There are also a few chests dotted around this area which will reward you greatly if you can collect the necessary number of keys.

Lying around the Mysterious city in the shallows you will also find rocks adorned with red clams containing pearls. These are valuable and can be used in missions, however you will need the help of beavers to collect them which means creating another quite expensive beaver hut.

The Wanderer will tell you that not much is known about the Mysterious city (Guess that's what makes it mysterious) and will point out that the city is flooded and destroyed, suggesting that its secrets are buried underneath the water. You will need to reveal some text on an old stone sign and it is after doing this that the Wanderer explains The last Story saying that the city lived for thousands of years in fear of a legend of a black tree which could turn anyone who looked upon it to stone. A wiseman had promised to deal with this however it was not long before evil thoughts came across his mind and nobody could stop him in time from visiting the hills where the black tree grew. It was this that caused the city to sink in the way you see it has. By using the turtles knowledge and gaining papyrus, you will be able to reconstruct the temple in which you can collect great reward by creating experience in the same way the elders of the once great city used to

Retrieved from "https://dreamfields.fandom.com/wiki/Mysterious_city?oldid=55589"
Community content is available under CC-BY-SA unless otherwise noted.