Jungle is a dream location in the Desert.

In order to unlock the territories you are required to completely harvest a particular resource. The first resource is highlighted by the game, but the subsequent ones need to be discovered.

Second Territory - Fern (15 pieces) one from the top below the outcropping next to the waterfall of available territory. 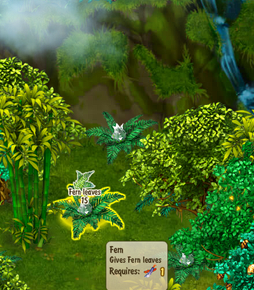 Third Territory - Cedar Tree (7 pieces) at the far left of the newly unlocked territory, the tree is half in the mist cover of the next territory, almost on the same line as the Fern which unlocked the Second territory. Use the stream as your guide. 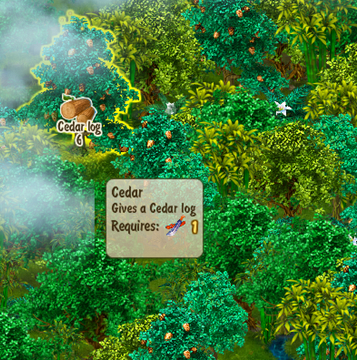 Fourth Territory - Camphor bark (7 pieces) at the far left just outside the range of the mist of the next territory 3 or 4 trees up from the lower edge. 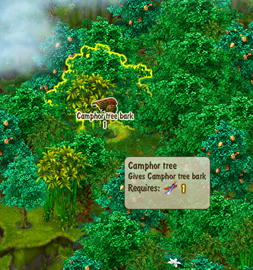 Fifth Territory - Small Cedar tree (3 pieces), on the cliff at the far left there is a large fern, at the base of the cliff there is a small fern directly underneath, the cedar is diagonally to the lower right of that lower fern. 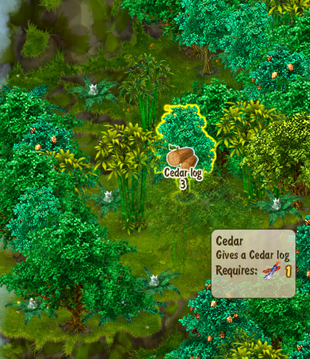 Sixth (and final) Territory - Bamboo (5 pieces), in the newly opened area at the top there's a valley that splits the plateau, on the right of that valley next to the little spur of cliff there is a bamboo hidden between a Cedar (7 pieces) and Camphor (7 pieces). Cut down the surrounding trees to get to it. 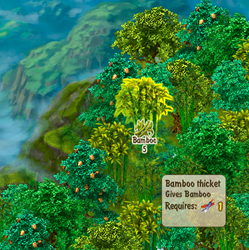 Retrieved from "https://dreamfields.fandom.com/wiki/Jungle_(dream)?oldid=51887"
Community content is available under CC-BY-SA unless otherwise noted.