Hermit Lowland is a dream location in the Polar lands. 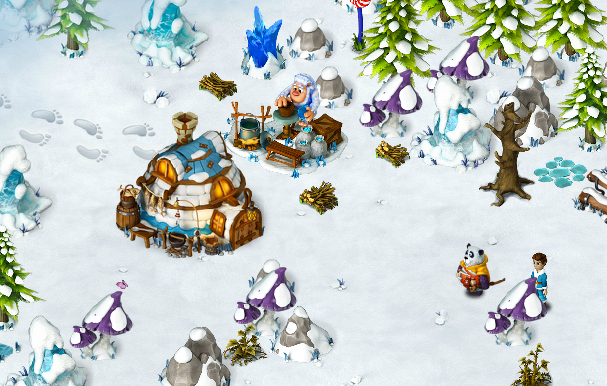 Travelling to the Hermit Lowland is suggested to you by the forest spirit after footprints are discovered in the snow in Sweet tooth glade . Managing to unlock this Dream and travelling to it will complete the mission Hit the Road.  Upon arrival, the Hermit Lowland doesn't look like the most welcoming of places, it is scattered with brushwood , snow and half finished constructions. That is why the first mission you will need to complete upon arrival is Major Clearout, which will involve you clearing up after the Hermit , despite having still not yet met him. Following the clearup and after you have finished building the Hermit's camp for him, he will appear and the story continues.

It turns out that the Hermit is actually the Sweet Tooth who's whereabouts were a mystery in the last Dream. He explains why he left the Glade and that he could now exchange Diamonds for food.

You will need to build a Hermitage , this eccentric Igloo is where the Hermit does his diamond cutting. Once completed you will also be able to visit the Hermit Camp to exchange food with him for diamonds. Some of the exchanges will involve you first making things in the Hermitage. After you have made an exchange with him, the Hermit won't be ready for another exchange for 8 hours, while he cuts more diamonds to trade with you.

Returning to the Hermit Lowland often is a useful thing to be able to do in Dreamfields, given that it is probably the best and cheapest way of getting your hands on diamonds

TIP: There is plenty of Lazurite, Nephrite and Crystal ice in the Cold Barrens if you are in need of some extra mined resources.

Retrieved from "https://dreamfields.fandom.com/wiki/Hermit_Lowland?oldid=35347"
Community content is available under CC-BY-SA unless otherwise noted.